Congratulations to many players who received special recognition as Telus Scholarship winners and/or Player of the Year honours.

BC HS PLAYER OF THE YEAR

Special congratulations to Brookswood’s A. Konig, named the BC High School Player of the Year by the BCSSGBA.

Aislinn Konig (5-9 G, Langley-Brookswood, 11) — The B.C. Triple A tourney MVP last season as a 10th grader, her will to improve on an already rich skill set threatens to make her one of B.C.’s best ever. Konig and her Bobcats went on to win the 2015 AAA BC’s and she claimed her second straight MVP Award. 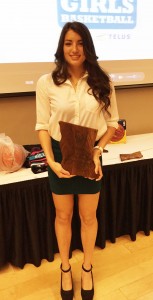 Congratulations to the following 15 girls named as B.C. High School Girl’s Players of the Year. 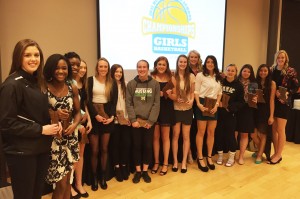 Lauren Bondi (5-5 G, Vancouver-Notre Dame, 12, Smith (Mass.)) — Fierce competitive streak has been fine tuned over career to the point where she has been able to elevate play of her entire team.

Yagmur Bul (5-4 G, North Van.-Bodwell, 12) — Great anticipation from a defensive stance means seven steals per game, coach Jim Burnett says she is “most complete player I have ever coached.”

Taylor Claggett (5-10 F, Abbotsford-MEI, 12, UFV) — Has touch and radar that are off the charts, one of the top offensive rebounders in recent provincial history. Knows how to win a loose ball.

Claudia Hart (6-0 F, North Van.-Seycove, 11) — Humble and a hard worker, those character traits come with a super skill package of scoring and rebounding.

Emma Johnson (5-7 F, Kelowna-Immaculata, 12, UBC-Okanagan) — Fluidity and tenacity are her greatest strengths. No-quit attitude is enhanced by her ability to run the floor and finish in transition game.

Jessica Jones (5-8 G, Richmond-McMath, 11) — A player. Pure shooter with the ability to help her team through exceptional anticipation on the defensive end of the floor.

Ozi Nwabuko (5-10 F, PoCo-Riverside, 11) — Testament to her tenacity is the ability to excel in defensive match ups from point guard to post. Relentless rebounding force on both ends of floor.

Alicia Roufousse (6-2 P, Abbotsford-WJ Mouat, 12, UFV) — Has the ability to get the job done at both ends of the floor both on the perimeter and in the pain. Offensive game continues to grow.

Shae Sanchez (5-8 G, PoCo-Riverside, 10) — Already an experienced player despite age, she has added passing and defence to a skill set that is highlighted by her dynamic shooting range.

Alina Shakirova (5-8 G, Prince George-Duchess Park, 11) — On-court smarts and feel a huge part of her game. Self-motivation combined with her athleticsm make her a threat to keep improving.

Lauren Yearwood (6-3 P, Victoria-Oak Bay, 12, Oregon) — Sound and balanced, she has world-class experience. Graceful in post, yet guard skills seem more and more natural. Can do it all.