Provincial Basketball Championships (virtual style) are back at Langley Events Centre.
Normally at this time of year, Langley Events Centre in partnership with Junior Boys Coaches, the BC Secondary School Girls Basketball Association, and the BC High School Boys Basketball Association would see the courts bustling with action with a total of 356 Games across multiple courts over the span of a dozen days. But with no tournaments in 2021, the focus is shifting to highlight some of the classic championship final games (both boys and girls games from all of the respective tournaments, utilizing available archived video), all of which will be available to stream free of charge at www.tfsetv.ca

The first game will be shown on the previously scheduled final evening of the 2021 Junior Boys
tournament, on Tuesday March 2nd . Games on March 3 rd to 6 th will follow the Junior Girls and Senior Girls scheduled dates. Tuesday March 9th will feature the BCHSBBA 75th Anniversary Video which was featured one year ago at the celebration banquet. And finally, games March 10th to 13th will be shown during the planned Senior Boys week. 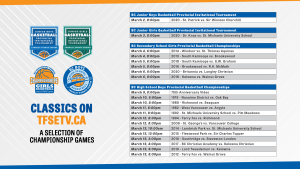 A detailed schedule of games is attached, and is also available via LEC social media.