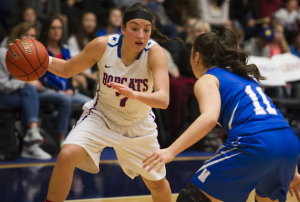 Sage Stobbart – Seycove
Jessica Zawada – R.A. McMath
THE PROCESS
Dozens of coaches of top ranked A, AA, AAA teams were asked to complete a nomination / generate a list of the top players in BC for their 2015-16 high school season.
Summer, club or past season performances were not to be factored in to the decisions.
Nominations were collected, data was collated and a ranking of players was produced that included approx. 25-30 players.
This ranking went to a BCSSGBA committee with an external independent chair who gathered further details, information from a range of sources.
The results of the coaches rankings were respected and the independent chair’s information helped with final committee decisions. These final decisions were very challenging.
We respect that some very good players are not included on this list and that some people may have individual differences of opinions over a few players who are on the list and those left off.
Thank you to the committee for your work with this process and to Howard Tsumura at The Province for his continued support of high school sport in BC.
THE PROVINCE: http://blogs.theprovince.com/2016/03/01/the-super-16-b-c-s-best-senior-varsity-basketball-talent-as-chosen-for-the-province-by-the-bcssgba/